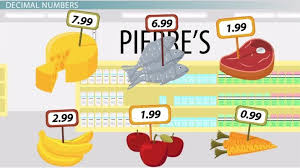 We can describe numbers smaller than one by using fractions or decimals. Today, the decimal system is more common than fractions.

To indicate a decimal number we use a point (.) and this includes money such as dollars and cents.

Look at these decimal examples:

Remember that we use commas to separate thousands. Be careful with commas and points. Some languages use them in the opposite way!

How to Say Fractions in English