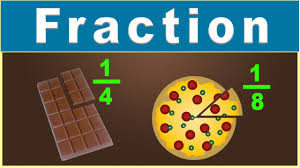 We can describe numbers smaller than one by using decimals or fractions. Today, most systems use decimals, but it is still useful to know how to read and say simple fractions in English.

Look at these examples of fractions:

Although the system of fractions is not used much these days, we commonly use a few simple fractions in everyday speech, for example:

Note that after “one and a half”, the noun is plural:

How to Say Decimals in English