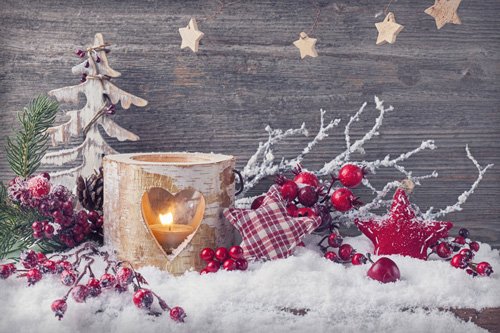 Winter Holidays Around the World – Culture and Vocabulary Lesson

Holidays are special days for the people of one nation or culture, which are set aside by the law or through a custom, and on which everyday activities, such as work or school, are normally suspended.

Every country has several important holidays, which can be national (important for the state), religious (important for a particular religious group), or simply cultural (such as celebrating the beginning of a season, for example).

Many holidays are celebrated in the winter, which is why this period is also known as “the holiday season”.

Hanukkah is an eight-day long Jewish holiday which commemorates the successful rebellion of the Jewish people (167 to 160 BC), who reclaimed the Holy Temple in Jerusalem.

Because Jewish people follow the lunar calendar, the first day of Hanukkah falls on a different date each year, however, it is always in winter.

This holiday is marked by lighting eight candles – one each night – on a hanukkiah, a special lampstand. This tradition is respected because it is believed that when the control over the Temple was regained, the lampstand put there burned for eight days, even though there was enough oil only for one day.

This is also why on Hanukkah people eat a lot of oil-based food, such as latkes (potato pancakes eaten with sour cream or cheese), and special doughnuts.

Commemorated on December 13, St. Lucia’s Day is one of the biggest winter celebrations in Sweden, based on the stories told by the first Christian monks in the country.

St. Lucia was a young girl killed for her Christian faith by the Romans. Her name means “light” and it is believed that she wore candles on her head while she was carrying food to other Christians hiding underground.

Nowadays, Swedish girls wear white dresses and a crown of candles on their heads to honour St. Lucia. Green branches on the crowns are meant to symbolize new life in spite of the harsh winter weather.

Lussekatts, buns flavoured with saffron and raisins, are a special breakfast treat eaten on this day.

Christmas is the biggest annual holiday for the Christian world, celebrating the birth of Jesus Christ.

In most of the world, it is commemorated on December 25, however, many Eastern Orthodox churches use a different calendar, so, for this reason, they celebrate Christmas on January 7.

In addition to its religious importance, Christmas has also been adopted as a cultural holiday by many non-Christians. Each country has unique Christmas traditions, but nearly all of them include a large family gathering, decorating the house, exchanging gifts and having a long feast.

In some European countries, people go carolling, that is, singing special Christmas songs on the street. It has also become popular to decorate a Christmas tree, both inside the house, and on city squares.

The Three Kings Day commemorates the end of these celebrations. This holiday was inspired by the biblical story of the three kings from the East (also referred to as three Wise Men or Magi), who spotted a bright star in the sky the night Jesus was born, and came to see baby Jesus.

This holiday is so important for Mexicans that they often give additional gifts on this day, even though it is shortly after Christmas.

Another custom specific for this holiday is baking the Rosca, a sweet bread ring in which a small baby Jesus figurine is placed. Whoever finds the figurine has to host another holiday’s party in February.

Having been created in 1966, Kwanzaa is the first holiday specifically celebrated by the African-American diaspora. (Diaspora means the movement of people away from their own country.)

The holiday honours African heritage among people living outside Africa, and the celebrations last for a week – from December 26 to January 1.

Before the feast, families usually discuss African history and culture, and perform a candle-lighting ritual. During the week of Kwanzaa, many cultural exhibitions are held, celebrating African dance, music and poetry.

Chinese New Year is the biggest holiday in China, occurring on the last day of the last month of the Chinese calendar, which does not coincide with the December 31st, but instead falls between January 21st and February 20th.

The celebrations are held all over the country and normally last for two weeks, making it the longest festival in China.

During the celebrations, you can see incredible decorations such as dragons, lanterns, flowers, as well as fireworks and people dressed in traditional Chinese clothing. Windows and doors are usually decorated with red colour papercuts to symbolize good fortune, wealth and longevity.

This festival honours both Chinese deities (gods) and historical figures.