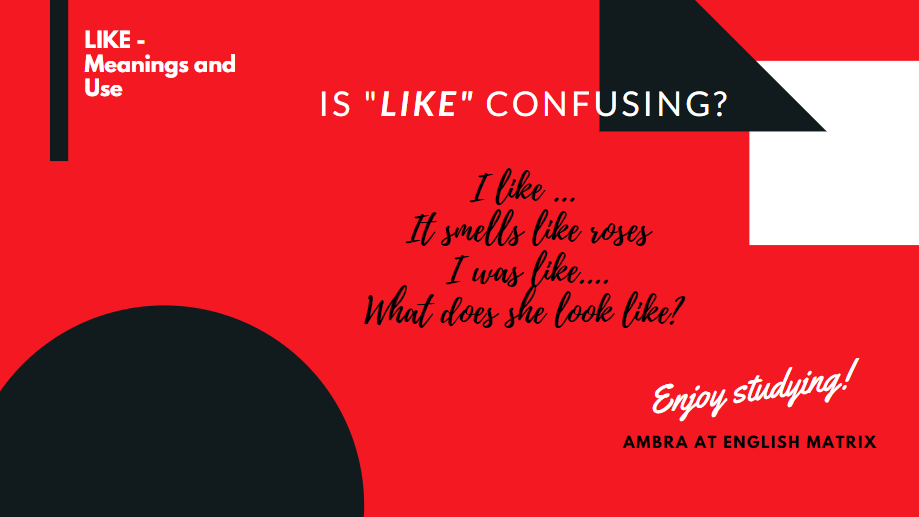 We use like to talk about things or people which we enjoy or feel positive about:

She really likes the singing of Luciano Pavarotti.

She likes to go and see her parents at the weekend.

He likes his friends to call him Hank.

Do you think she would like us to bring some chocolates or flowers?

We liked how they cooked the fish.

We use would like or ’d like to offer something to someone in a polite way or to ask them to do something politely (requests), or politely to say what we want. We use the to-infinitive form of verbs that follow:

[At a fast food restaurant]

How can I help you?

[In an email to a company that has advertised a job]

Like means ‘similar to’. We often use it with verbs of the senses such as look, sound, feel, taste, seem:

My sister is like my mother. (My sister and my mother are similar)

When we use like to mean ‘similar to’, we can put words and phrase such as a bit, just, very, so and more before it to talk about the degree of similarity:

It’s a bit like skiing but there’s no snow.

Isn’t that just like the bike we bought you for your birthday?

The car was more like a green than a blue colour.

In informal contexts, we can use like as a conjunction instead of as. Traditional grammar books consider this use of like incorrect:

We can use like as a suffix at the end of a noun to mean ‘similar to’:

There is something child-like about Marianne. She always seems so innocent.

In informal speaking, you will hear like used very commonly. It has a number of functions. It is important not to use these forms in formal writing such as academic essays.

We can use like to fill in the silence when we need time to think about what to say next or how to rephrase what we have just said:

I want to … like … I think we need to think carefully about it. It’s … like … it’s a very difficult decision for us to make.

We can use like to bring attention to what we are going to say next. We do this especially when talking about quantities and times:

There were like five hundred guests at the wedding. (like brings focus to the large number of guests)

It wasn’t till like 12:00 that I actually got to start on the project. (like brings focus to how late it was)

In speaking, we often use like what? to ask for an example:

Some really funny things happened on the last day of school.

It can also be used to ask a question, meaning ‘similar to what?’:

[talking about a new restaurant]

There was kangaroo steak on the menu. I decided to try it.

Softening what has just been said

We can use like at the end of what we say to modify or soften what we have just said especially if we are not sure if it was the right thing to say:

[A and B are talking about B’s holiday]

So did you buy anything there?

I hated the film. It was very violent, like.

It has become common in very informal speaking to use like as a reporting verb. It can be used to report what someone said or what someone thought. It is used especially by young people, and it makes what is reported sound more dramatic:

Jason was like ‘I’m not going to Alma’s party because Chris is going to be there’ and I’m like ‘he’s so afraid of Chris’. (in the first use of like, it means ‘he said’, but in the second use it means ‘I thought’)

We can use the structure it + be + like to introduce an example or say that something is similar to something else:

It’s like when you go to the airport and you keep thinking that you have forgotten something important.

[a woman talking about her husband Bob]

Everyone is always saying hello to Bob. It’s like being married to a superstar!

We can use be like to ask for a description of someone or something (e.g. their appearance, their character, their behaviour):